Acne from a Naturopathic Medicine Perspective 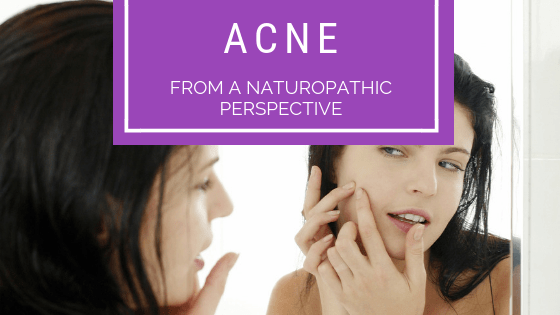 Acne from a Naturopathic perspective

While many of us were told that our acne was just a byproduct of adolescence – as if we needed anything to make us feel more awkward at this stage – how come nearly half of men and women in their third decade of life are still affected by the condition? The truth is that Acne vulgaris occurs in 50 million persons living in the US. Treatment recommended by the Journal of American Academy of Dermatology aims at symptomatic relief. In other words, treatments such as topical therapies, antibiotics, oral contraceptives, and retinoids are often used to reduce the number of outbreaks, but often don’t get at the underlying cause. The list of side effects of these therapies are long and can be quite serious. From a naturopathic perspective, there are several common patterns that result in the presentation of acne, and the fixes may surprise you.

Whether acne has plagued you for years of your life, or the occasional zit just always happens to appear at the worst time, some of these dietary, herbal recommendations can help. The side effects?  With these interventions you can only expect better nutrition, vitality and all-round health.