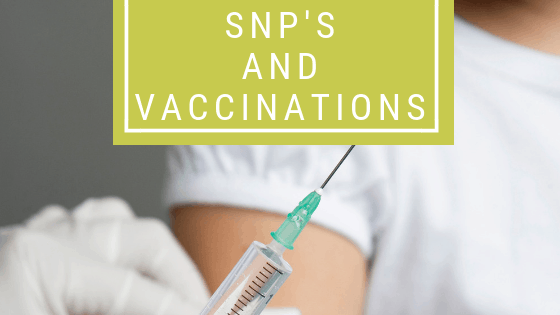 Our genes. They are essential to who we are, and what may come of us, but how many of you think about genes when you think about vaccinations and their potential for harm?

Inspired by a recent talk given by Dr. Kendra Becker-Musante ND, APRN, BC., I wanted to share with you what research says in regard to our genetics and it’s influence on potential adverse effects in children post vaccination. Also after a decade of seeing children and checking their genes and seeing who reacts to vaccines and who doesn’t, I really hope researchers are looking into this and one day we can make better informed decisions.

Should you get your child genetically tested?

It’s definitely important to see where you’re at from a genetic standpoint. If you can have the genetic information on your child, you are one step ahead. There are a so many diseases and conditions that are linked to genetics, and you may find that you or your child has a genetic predisposition to develop said condition during their/your lifetime. However, it is just that, a genetic predisposition. If you can manage your genetics appropriately, you have the power to turn things around.

Vaccine injury exists. If we can understand the genetics of the child, and then be able to predict if they are more or less likely to have an adverse reaction, we can work to avoid any potential harm. Of course, we can’t predict anything with 100% certainty.  Having the knowledge, however, that these genetic predispositions exist and that they can predispose an individual to having certain reactions, is important when parents are faced with decisions surrounding vaccination.

There is a term “adversonomics”: essentially, the study of the immune system, inflammation, and other responses we may have in relation to vaccines. These adverse responses will depend on various factors, including but not limited to, the age of the individual, their sex, race, health status, the quality and quantity of the vaccine given.

Also of utmost importance is the susceptibility of the immune system of the individual. This is what will make the difference between the children that have reactions to vaccines and those that don’t.

What to look for?

HLA genes are some of the genes we need to look at. These genes play a role in the way the immune system presents antigen presenting cells (APCs). Of importance, these genes are associated with several autoimmune diseases. Easily enough, HLA genes can be tested with conventional blood tests!

Another gene to consider is the MTHFR.  In individuals with an MTHFR mutation, they will present with the inability to convert folic acid into the “usuable” form of it in our bodies (aka 5-MTHF). Upward of 60% of our population has an MTHFR mutation. Again, easily testable, via blood or saliva, or just by looking at the baby! If the baby has a tongue-tie or a lip-tie, a stork bite or Mongolian spot, or has dimples on their buttocks at birth, these babies have a MTHFR mutation! These individuals have a higher level of inflammation and have impaired levels of detoxification. When an individual has an impairment in detoxification, they will not be able to convert and detoxify properly in situations like a vaccine administration.

Another mutation that is important to keep in mind is the SCN1A, sometimes called “the autism gene”. It’s a sodium channel modulator, which means, it also modulates calcium, magnesium, and potassium. So, you can imagine, if these ions aren’t being modulated correctly, you’ll certainly have higher levels of inflammation. This was actually one of the first mutations identified in the 80’s, linked to causing epilepsy in febrile seizures. We now know that approximately 50% of the autism population has some level of seizure, diagnosed or not. If we have a genetic predisposition for this in our family, it could make the difference for family when they’re deciding when or if to vaccinate.

A note on autism and MTHFR

We know that there isn’t just one single gene involved in autism, but we also know that 98% of autistic children have a MTHFR mutation. We know these children will have heightened levels of inflammation as well as impaired detoxification.

Also important to note are the roles of interleukin 4, which stimulates B and T cell proliferation and ICAM1 gene, which plays a role in stimulating cytokines. Aluminum, a common adjuvant in vaccines modulates the immune system and has been shown to increase response in interleukin 4 deficient mice, ultimately triggering the immune system on a different level. Augmenting an immune system, for example, in a baby under the age of 2, where the blood-brain barrier isn’t quite formed and the immune system isn’t quite developed, may result in a “hyper response” to vaccines which can be really problematic.

Ingredients in vaccines, such as aluminum, or formaldehyde, acetone etc., used as preservatives and as other components of vaccines, bypass our natural immune response via the gut via injection directly into our circulatory system. Consequently, we could really be setting ourselves and our children up for autoimmunity.

What We Know About these Vaccines

There are various single nucleotide polymorphisms (SNPs) associated with each of the different vaccines. SNPs are the most common type of genetic variation among people and each SNP represents a difference in a single DNA building block (re: nucleotide).

Since the California mandate, we’ve seen a spike in autism by 17%!

CBS – leads to ill functioning folate receptors. When this happens, we don’t have the right communication across the cell membrane, which will have consequences in cell signalling.

GAD – known to affect GABA function, which in turn can lead to issues with the ability to relax and digest. The inability to do so will lead to a multitude of issues.

IRF3 – in those with this SNP, when given the vaccine, they have an accelerated reaction. Interestingly, if baby has wild Hib, they don’t have the same reaction!

GLB1 – this SNP can alter the development of extracellular elastic fibers and connective tissue.
Remarkably enough, children on the autism spectrum have low tone, which can se suspected when someone don’t have proper collagen development!

Another SNP associated with Hib, largely due to the chemicals that are used to attenuate Hib, is called ALDH. In people who carry this SNP, they will have a higher level of toxicity with multiple pesticides (namely the organophosphates – used typically in conventional farming). In addition, this is also associated with increased risk for Parkinson’s disease, which we know is correlated with toxicity, especially around pesticides.

Given on the 1st day of life, many of the children who have vaccine injury form this vaccination will have uncontrolled eczema.

APB1 pathway and DAO – these increase selective non-steroidal anti-inflammatory drug (NSAID) hypersensitivity.  If by chance mum takes an NSAID for pain after childbirth and it is then passed through breast milk to the newborn, now this child is triggered. Depending on where we stand from a genetic standpoint, these events can set a baby up for eczema, allergies, and inflammation at only 24 hours of life!

HEXG2 – known to leak oxalates into the gastrointestinal system. A healthy gut will absorb approximately 10% of oxalates (which is tolerable to the human body). When we have a leaky gut, or small intestinal bacterial overgrowth (SIBO) or another form of gut imbalance, we can absorb over 50% of oxalates from food. This can then lead to neurological issues, as well as a higher probability of forming calcium oxalate kidney stones.

Other SNPs associated with Hepatitis B:

CNR1 – for cannabis. This SNP increases risk of schizophrenia in adolescents that use cannabis, also increasing the risk of white matter brain deficits.

Any of the CYP SNPs – dealing with liver and liver dysfunction, those that have these SNPs can be at an increased risk of cancer.

H6PD – Associated with an increase in polycystic ovary syndrome.

SLC20A6PAH – With this SNP, this gene won’t work optimally if there are chemicals and preservatives in place, just like those found in vaccines. Another word of note, this SNP is down regulated by steviol (stevia alcohol). Consequently, children with this SNP will have some of the same neurobehavioural issues seen with aspartame and other fake sugars. This SNP has many implications in other medications also, not just the IPV vaccination.

NFKB1 – regulates chemokines and adhesion molecules. Again, if we’re upregulating these we are creating an inflammatory reaction which can then induce a liver injury in a child with an immature immune system and an immature liver.

DVH – associated with intrauterine growth restriction (IUGR) birth weight in African American women; there has been research that has correlated the MMR vaccine with autism in African American male children. So, if a woman has this DVH SNP, and they then have a baby with a low birth weight, that baby is already set up to have a reaction to the vaccine!

G6PD – functioning essentially as a protective mechanism in the body, this gene can be down regulated in various situations, including in the presence of a whole host of pharmaceuticals. It is X-linked, so in a boy, we will see a slew of things that can be triggered by the MMR vaccine. In addition, it has a high prevalence in the Jewish population.

Also to keep in mind here:

APB – this SNP increases histamine intolerance as discussed above.

CD4-6 – known to be the binding site for measles.

Multiple vaccines at once in a child that does not have a microbiome that is completely set up, whose blood-brain barrier isn’t completely formed, will inevitably lead to higher levels of inflammation, and that can be concerning.

Although there is certainly not only one culprit when we discuss autism, looking at the whole genome can give you and your family a comprehensive idea of what may be at play. If anything comes up on your child’s genetic profile, you can use that to work with a healthcare provider to do what is best.

At the end of the day, parents and patients, need to be fully informed, and to be able to make responsible decisions for themselves and their families.