Mold Toxicity: It’s not All in Your Head 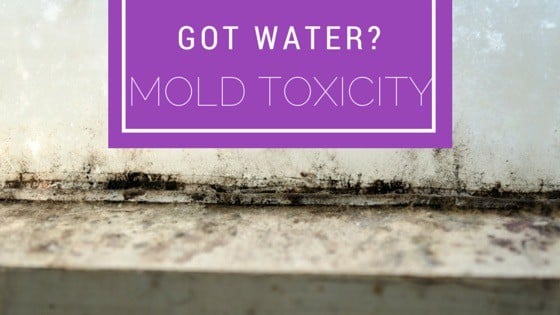 I never miss an opportunity to talk to my patients about mold toxicity and its many complications. I’m incredibly passionate about this under-treated issue; time and again I see successful diagnoses dramatically change people’s lives.

Since the symptoms of mold toxicity run far and wide, they’re often either ignored or incorrectly diagnosed. It’s rare that most people even reach the point of testing themselves, their home, or their offices for black mold. It’s just not on their minds.

Most doctors learn about bacteria and viruses in medical school, but not enough about fungus (mycology) or black mold. If you find yourself hopping from doctor to doctor with no answer as to why your brain is foggy, you feel anxious, or your skin is breaking out, you might be suffering from mold toxicity.

So before you think persistent symptoms are all in your head, keep reading to understand the facts, causes, and risks of this uninvited guest in your home or office.

How Does Mold Toxicity Occur?

Fungus causes mold toxicity by releasing a poison called a mycotoxin, commonly found in wet homes or buildings and some foods such as coffee and peanuts.

Some important questions to ask yourself are: Has my home or office recently been flooded? Can I smell mildew in the basement? Do I have water damage? See black spots in the shower? See black spots anywhere?

Water damage is a leading culprit of mold toxicity. Since the odorless mold lives in hidden spots and floorboards, it often lurks quietly and indefinitely.

How to test for Mold Toxicity?

There are several ways. I recommend either an VSC online visual test , or a home tester kit, called the MyERMI test which works extremely well in detecting mold. Put the kit in the bathroom, rooms you spend a lot of time in like bedroom, or any area you suspect water leakage. Within seven days you’ll find out if toxic mold is your culprit.

Watch out for foods like corn, alcohol, mushrooms, peanuts, wheat, bread, yeast, and coffee, where mycotoxins are known to flourish.

If you’re suffering from mold toxicity, the best diet is a modified Paleo diet with no grains since they’re known to contain mycotxins. And absolutely no sugar of-course.

Aside from lack of proper physician training, testing remains inconsistent because not everyone reacts to mold the same way.

Mold response depends on each individual’s Human Leukocyte Antigen (or HLA-DR gene). Since only one fourth of people are genetically susceptible to display adverse reactions to mold, this creates a gap in treatment and sensitivity.

I often see a patient who has persisting symptoms, but her family or friends think she’s crazy since no one else in the house has health problems. That’s because the HLA patterns are affecting her response to exposure, which then hinders detoxification pathways and inflammatory responses. I have had couples tested and my patient has all the symptoms because she has the gene mutation while her husband does not. I often here the ‘My husband thinks it’s all in her head.”

Mold toxicity can affect the mind in the form of intangible issues that are pegged as overarching “depression” or “stress.” Since many people have these problems from time-to-time, it’s simple to chalk it up to a hectic work or family life.

Major long-term effects are memory loss, insomnia, anxiety, and depression. Additional symptoms include difficulty focusing or finishing a task, disorganization, feeling disconnected, confused, not feeling like yourself, or losing parts of your personality.

Primarily, physical mold illness is associated with allergic reactions that appear to be just that. Respiratory symptoms such as wheezing, coughing, watery eyes, and skin irritation are common responses.

Mold has also been known to mimic cancer. In a recent study, lung cancer patients were successfully treated with anti-fungal drugs. This poses the question: how many more patients out there have a mold problem that looks just like cancer?

How to Fight Toxic Mold:

When helping patients suffering from mold toxicity, I always look at the sinuses, lungs, and the gut, since that’s where the spores like to stick. I’ll run a urine test to look for the three main mycotoxins and run various blood tests (MMP9, VEGF, C4a, and TGF beta-1) recommended by Dr. Shoemaker who is a world’s authority on mold testing and treatment. Additionally, I may test the stool for yeast overgrowth.

If you think you’ve been exposed to mold at home or work, get your place tested. This requires you to completely remove not just the mold, but the spores that live on your clothes and furniture.

To start fixing the damage internally, you’ll need to detoxify. In addition to a mold-free diet, I recommend constitutional hydrotherapy. This involves alternating hot and cold showers to help the immune system. Repeat three minutes hot, 30 seconds cold for three rounds in each shower, ending with cold. Skilled Colonics are also a powerful way to get the mold out of the bowels alongside a prescription drug called Cholestyramine.

Another very effective treatment method is far or near Infra-red sauna therapy and sweating. Sauna therapy has numerous benefits in the treatment of mold toxicity and respiratory troubles like wheezing and coughing.

Lastly, vitamins are helpful. There are a number of common vitamin deficiencies associated with mold toxicity including vitamin D, magnesium, zinc, coenzyme Q10, and B vitamins. Replacing these will give your body the boost it needs to fight mold.

I also recommend oil of oregano, probiotics, and activated charcoal to aid detoxification.

For the science nerds out there who would like to read a detailed article, click on the article below:

A Review of the Mechanism of Injury and Treatment Approaches for Illness Resulting from Exposure to Water-Damaged Buildings, Mold, and Mycotoxins

It’s not so much the treatment of toxicity that’s the problem, but the diagnosis—which too often goes unnoticed. If you think you’ve been exposed to toxic mold, be sure to talk to a doctor that’s versed in the topic and can provide the right tools to help you recover fully.