The Gluten Free Fad: How I Became A Believer 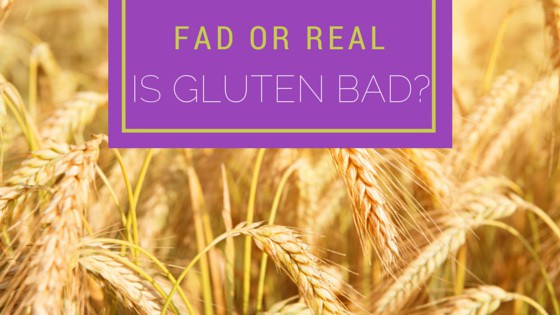 Growing up in Iran, “gluten free” was unheard of. In my family, bread was an essential part of every meal. I admired the elegant beauty of Iranian wheat fields—creamy and slender, dancing daintily in the wind.

But my patients for the past 9 years have led me to believe that gluten is detrimental to most of our bodies—and not just because it’s a popular diet. My belief is based on proven, scientific facts and clinical evidence.

What is Gluten, and Who Suffers?

Gluten is a compound of two proteins: gliadin and glutenin. It’s present in breads, pasta, cereal grains such as wheat, rye, barley, kamut, and certain oats.

1% of the world suffers from Celiac disease—a genetic, autoimmune condition triggered by gluten that causes the body to attack the small intestine.  While these patients represent the most severe end of the spectrum, many more experience mild to extreme sensitivity. This condition has become so common, it’s earned its own name in the medical world: Non-Celiac Gluten Sensitivity. People in between Celiac and non-celiac are now termed “Celiac Light”.

Back it Up With Science

Out of four major randomized control trials on Non-Celiac GS, three found that gluten and wheat were an issue. A 2015 systemic review found that 0.5%-13% of us have non-celiac gluten sensitivity. This number would be much higher if they looked not only at GI symptoms but at other common side effects of gluten such as headaches and join pain. That’s big.

Removing gluten from the diet has been found to drastically improve eczema, ADHD, and Autism—especially in children. My patients with these conditions have shown amazing results on a gluten free diet. When I see that something works, I can’t deny it.

Travel anywhere around the world, and you won’t hear half as many complaints about gluten sensitivity as you do in the U.S. That’s not just because we’re quicker to jump on a crazy diet fad (although, we might be). It’s because of the way we’ve hybridized our wheat into a high-gluten imposter.

FrankenWheat, coined by Dr. Mark Hyman, is wheat’s genetically modified, scientifically engineered, goose bump-inducing cousin. Over the past 50 years, our evolving food systems have produced a hybridized version of wheat, containing an extremely fattening starch, a super-inflammatory form of gluten, and an addictive component that keeps you coming back for more. Together they make up FrankenWheat, which manifests itself in countless regularly consumed foods you wouldn’t even think of, like soup and vodka. As we continue to ingest this lab concoction, we increase our risk for gluten sensitivity and other chronic issues.

But Gluten sensitivity stems back even further. Wheat, rice, and other foods containing gluten are highly consumed, but very low in nutrients. Back in the 50’s, people were experiencing folic acid deficiencies, which caused birth defects in newborns. The government thought it was smart to spray their wheat crop with folic acid in an attempt to get it back into people’s bodies. However, 40% of the population now suffers from an MTHFR mutation in which folic acid cannot be broken down by the body, causing numerous symptoms and issues.

So what are your thoughts on gluten?

I tend to steer clear of turning my back on a food group without determining how it affects each individual patient. And I’ll state it clearly: I’m not anti-gluten. But I can’t disregard that eliminating gluten from the diet does display benefits for some.

I personally avoid gluten as much as possible, because the results for myself are undeniable. (Yes, my Persian grandmother is shaking her head.) However, I recommend my patients try an elimination food plan to find out if they are sensitive before nixing it completely. Even a simple blood test could display a lot of information.

If you think you may be experiencing Non-Celiac Gluten Sensitivity, don’t laugh it off as a fad. Let’s figure out how gluten affects you.