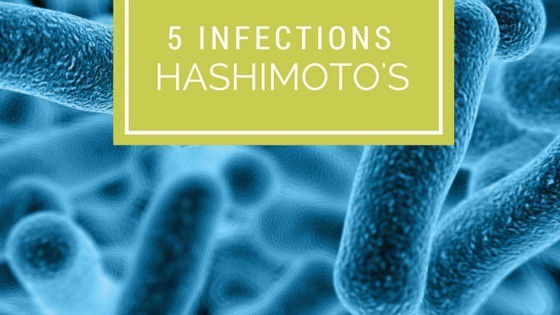 Now that we’ve covered some ground in my previous posts on common symptoms, sources, and herbal treatments for Hashimoto’s Disease, I want to discuss a lesser known link that could be causing and perpetuating this autoimmune disorder—Infections.

Unfortunately in both traditional and alternative medicine, the infection link is often overlooked, however as long as the infection is active, Hashimoto’s will persist, rendering medical treatments ineffective. Not to mention the frustration with patients’ lingering issues.

Below are five leading infections that I test my patients for when they are suffering from Hashimoto’s Disease.

Known as EBV for short, almost everyone has had this virus at one point (unknowingly), but the immune system soundly fought it off. Nicknamed the “kissing disease,” this virus causes mononucleosis, or “mono,” which you or a friend likely dealt with at a younger age.

In short, if you have the genetic predisposition, this virus can enter the thyroid gland causing something know as “molecular mimicry.” In turn, your immune system sees and recognizes the virus, but as it’s fighting, it mistakenly attacks healthy tissue as well, causing the thyroid gland to be attacked.

Also high on the list is Yersinia, which is a bacteria that lives in the digestive system. Passed on through contaminated food or water, the body is often adept at fighting off this bacteria leaving you to think you simply had a “24-hour bug,” or ate something bad. However, Yersinia can take up residence in the gut without overt symptoms, leaving you to believe all is well. In turn this compromises your gastrointestinal health and leaves you vulnerable to autoimmune issues. With this bacteria residing in the mucosal barrier, the occurrence of molecular mimicry (as listed above) can ignite an attack.

For many years, doctors believed that ulcers were caused simply from stress. However, later studies brought to light the cause to be a bacteria called H. pylori, which is activated by stress. H. Pylori is also provoked by low stomach acid or food sensitivities.

This bacteria spawns a similar “mimicry” and leads the body to a fight off the bacteria, while taking down good tissue with it. Symptoms of H. pylori include abdominal pain, nausea and vomiting, fatigue, low red blood cell count (anemia), decreased appetite, heartburn, and bad breath. A study showed a 50 percent reduction of the TPO values (auto-immune marker) in Hashimoto’s patients when they were treated for H.Pylori alone. This is remarkable, meaning what lies in the gut is linked to why your thyroid is being attacked.

Candida and other yeasts are necessary elements for a healthy digestive tract, however an overgrowth of these stomach essentials brings on a number of pesky health problems, including autoimmune disorders.

These overgrowths impair absorption of key nutrients that are required for immune function and inhibit the intestinal barrier allowing toxins to enter the bloodstream and weaken the immune system.

Having “parasites” can mean many things, but the two common types are worms (tapeworms and roundworms) which attach themselves to the lining of the small intestine. Or protozoa, one-celled organisms like Giardia, which cause acute symptoms such as chronic diarrhea or constipation, fatigue, dizziness, joint pain or hives.

You don’t need to travel to a far off place to contract parasites. They live in salad bars, daycare centers, you name it. Recently found in Cilantro imported from Mexico to the US. Parasites can subsist for a long time in your gut, eventually causing other issues including autoimmune diseases like Hashimoto’s.

If you’re experiencing on-going problems with Hashimoto’s Disease and treatments have been unsuccessful, have you doctor test you for these infections to rule out unnecessary triggers for this problem.